I bought a wooden birdhouse at the craft store with the idea that my daughter would spend hours and hours unleashing her creativity on it this summer.  I envisioned her meticulously sketching out a design and then painting it lovingly onto the wood; her little tongue captured between her teeth like she does when she's concentrating, and at the end of it all I'd have a masterpiece and keepsake.

Yeah, that didn't happen. Between Minecraft videos and video games, she just couldn't find the time and when I kicked her off the internet and pried her fingers off the controller and told her I'd force her to work on it, she was so unenthused that she was just planning on smacking paint all over it like a toddler.

So instead of focusing on my failures as a mother and inspirational goddess, I decided I'd just trick this birdhouse out myself.  I recently purchased a wood burning tool (I've been wanting to try it for years) and this was my second project with it. 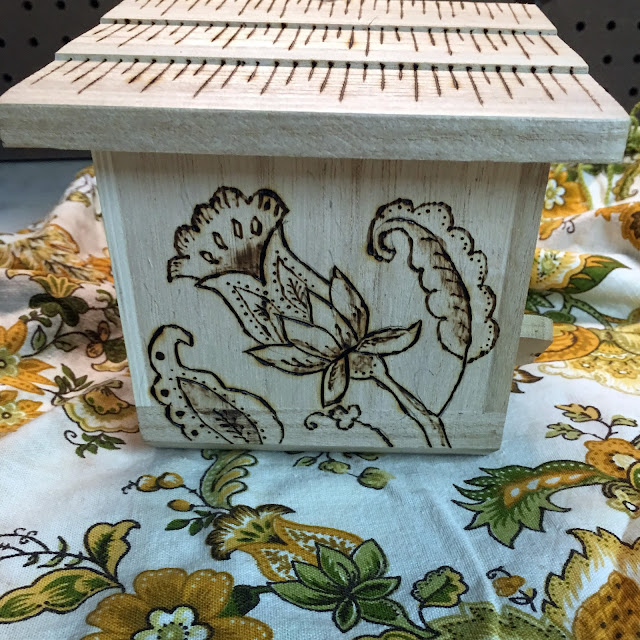 I found this lovely vintage tablecloth at Salvation Army last year and it was my source of inspiration.

It needed a bit of color. I didn't want it to be too vibrant or cover up the wood burning so I used this set of watercolors from IKEA and then put a couple layers of clear coat on it. 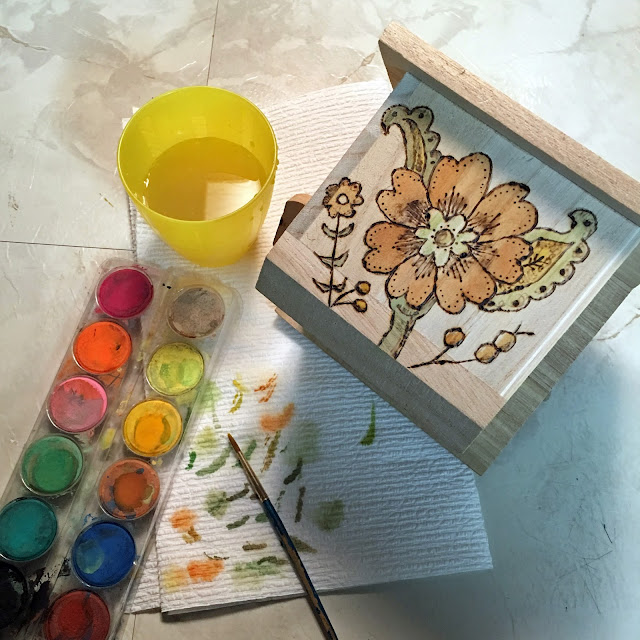 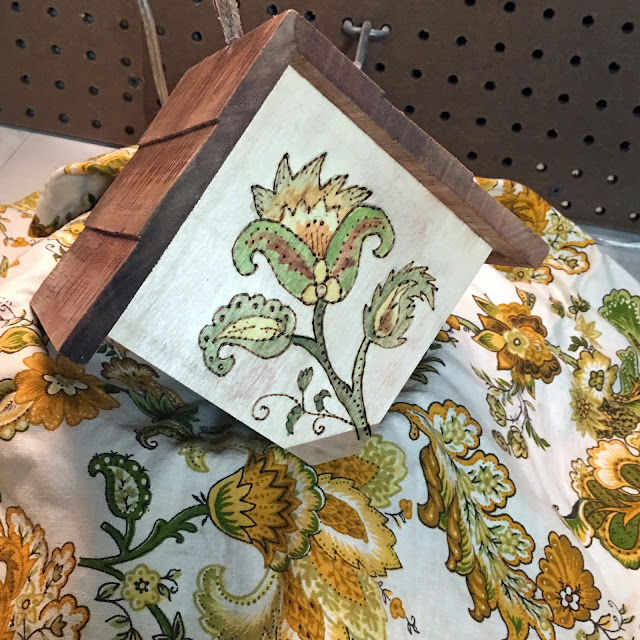 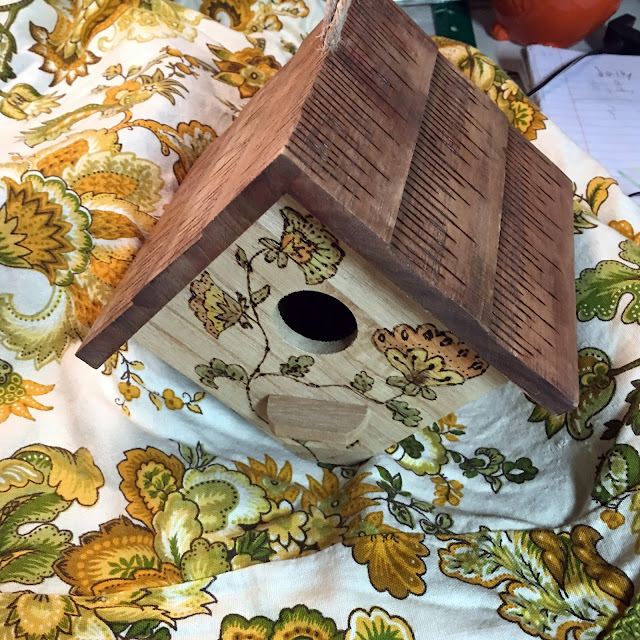 I was pretty proud of it and I knew when my daughter saw it she would be green with envy that I had created such a masterpiece when she could have done the same.  I'll never know though, since I haven't been able to get her off YouTube to look at it.
Posted by Pin and Paper at 7:21 PM No comments:

I can't believe it's been over 3 years since I posted on this blog!  Oh wait, yes I can. You know things just got overwhelming there for a while. I needed to pull back and focus on other things. The kids, my career, etc. Did I miss it? Yeah a bit, but mostly I didn't and that was a great sign that pulling back was for the best.

Why am I back now?  Well, the kids are older and less dependent. One is officially a teen (13) and the other one insists on being called a "tween" because her age is in the double digits now. Life is still busy, work is still there, but something was missing so I started spending more time doing the things I love again.

I still don't have the time or stamina to do enough crafting to produce a ton of products to sell, but I found that I was able to spend more time on my other passion, which was scouring thrift stores, garage sales, flea markets, and auctions for unique and interesting vintage items. First I did it just for myself and then when things started piling up around the house I decided I should maybe start paring down.That's when I started posting some vintage items for sale on Etsy and I find its been a really great outlet for me. It allows me to pass on some really cool stuff to other people and to earn enough money to continue my vintage shopping!

So I guess you could say I'm back - but just a little less crafty.  Now, that's not to say I haven't done any crafting. Way back in 2013 I wrote about my passion for this crocheted blanket from the Smurf's movie.

Well, it was truly a passion and I started on my own version of it shortly after I wrote that post and now - over three years later - it's done! 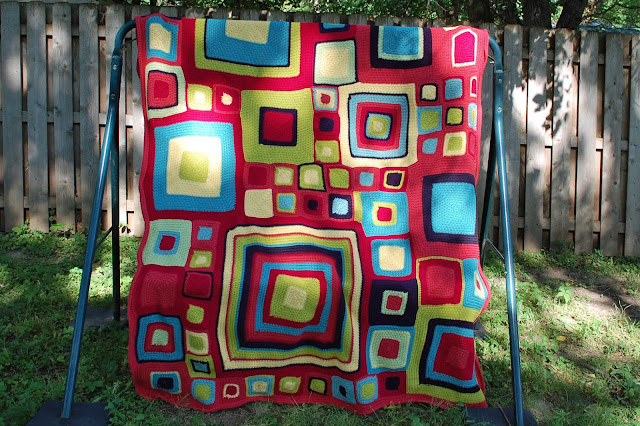 Now, I didn't work on it for three straight years - just a bit here and there when I had time.  I crocheted most of the blocks during soccer practices and little league games over the course of several months. Then once I felt I had enough blocks then it took me over a month to find just the right way to put them all together and piece them together. I actually finished it last fall but just hadn't gotten around to photographing it until now. 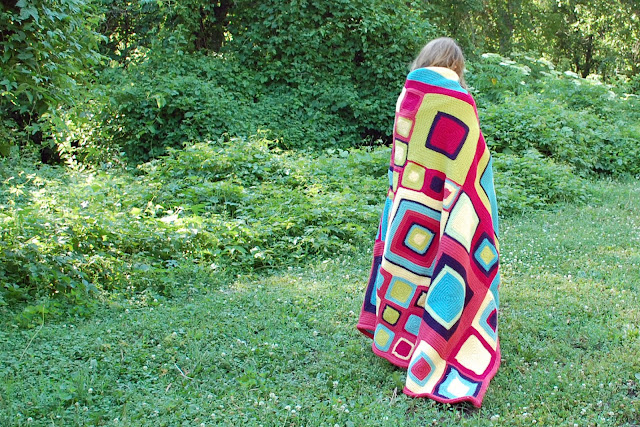 It's heavy. It's not straight or square. The border always curls up on it. You can see where I did a lackluster job of weaving in several yarn ends.  But I LOVE IT so very very much.  It's just what I wanted - something bold and crazy that looks like it was crocheted by someone's hippie great aunt. 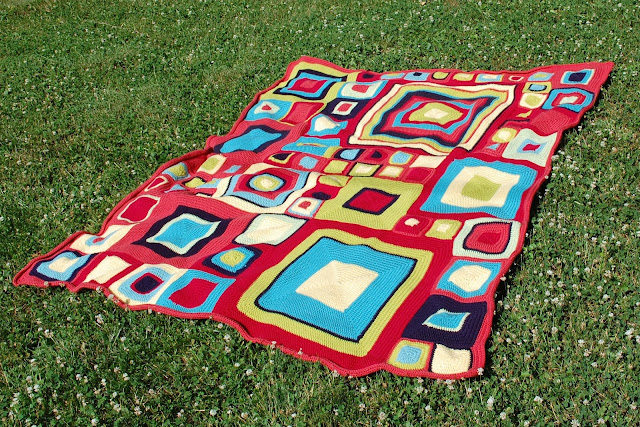 I hope it becomes a family heirloom and a couple generations from now, someone pulls it out of a trunk and says, "Look at this crazy, ridiculous thing! We'll let the dog sleep on it." 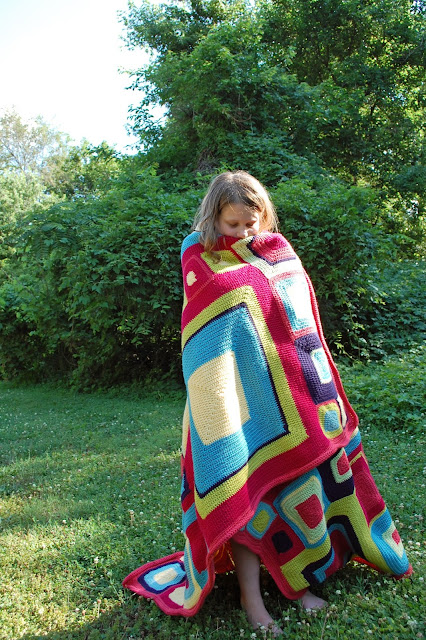 Posted by Pin and Paper at 9:49 PM No comments: